THE IMPACT OF INTEREST: FRACKSON SHABA ON HIS 2018 JOEP LANGE AWARD WIN

“My father’s passing was a turning point in my life. I figured that the only way to ever leave my village was my education: it was my get-away. From that point onwards, I worked very hard to fulfill my dream of going to university.”

Frackson Shaba grew up in the northern Mzimba district of Malawi. After primary school, he did not meet the strict acceptance standards of the governmental secondary school, so he went to a catholic one instead. Reality hit in the year 2000 when his father passed. Frackson was still in secondary school: “It was a very difficult time for me. From that moment onwards, I changed the way I was approaching school. As my mother was not working, I really had to work my way up at school to receive scholarships that would cover my future tuition fees. Whilst waiting for the exams, I took a voluntary job as a teacher at my old primary school to keep up to date and learn how to teach. In 2002, I passed my exams and did very well. Only 3 out of 30 pupils got to go to university: I was one of them.”

Frackson did a bachelor’s in environmental health at the University of Malawi, the Polytechnic in Blantyre. It was the first time he left his hometown and went to the big city, which he had looked forward to for a long time. Working as an environmental health officer for the Ministry of Health, he became accustomed to epidemiology, health economics, and statistics through his projects. He then informed program implementation as a TB coordinator in Malawi, a job that was very data demanding. After that, he became a Health Information Management Systems (HIMS) Officer. His interest in public health was increasingly growing alongside these different positions in the health sector.

Frackson received a scholarship to go to Melbourne for a Master’s in Public Health. When working on his thesis, he had the opportunity to interact with prominent scientists and develop many skills needed to become an independent researcher. “I had great mentors who assisted me to put my interests into perspective. I am proud to say that my research from my master’s thesis got published in 2017. This marked my first publication and gave me energy to continue in the field of research.”

When Frackson returned to Malawi, he worked for the NGO Population Services International (PSI)as a senior research officer for two years. Associate Prof. Kathryn Dovel, a connection Frackson made at the ministry of health, asked him to join a Wellcome Trust funded project on HIV self-testing. “When Kathryn asked me what I wanted to become in 5 years, I didn’t need to think twice, ‘I want to be a researcher and prepare myself for a PhD,’ I said. She promised to make me a researcher and help me prepare for my PhD studies and that vow weighed out any other job opportunity. I joined Kathryn and helped design the study on HIV self-testing, which is the study I presented at INTEREST2018 in Rwanda.”

Frackson won the 2018 Joep Lange Award at INTEREST with his abstract presenting groundbreaking work on the introduction of HIV self-testing in facilities in Malawi. Frackson was the research coordinator for that trial. “It was my first time traveling to Rwanda and I am so grateful. It was so nice to win the prize as it gave me the possibility to join the next INTEREST in 2019, in Accra, Ghana. I was not expecting a win at all. I was sitting in the audience with my team, and I remember thinking ‘hey this is a big deal to be chosen as the best abstract at such a great conference’. This amazing feeling went through me when I was awarded the prize. I realized that I could survive in the research field. It is also very nice to know that the last winner was also from Malawi. We are putting ourselves on the map.” The energy Frackson received from winning this award at INTEREST propelled him to continue his research on barriers to HIV self-testing in facilities. A paper will be published soon about the results of that study.

Frackson is currently starting to apply for PhD programs. With a PhD, he hopes to stand on his own as a researcher and be trusted with funding. It is the last step for him to become an independent researcher.

“If things fail, let them fail knowing you tried your best. Just maintain and lift yourself up again because you will get there in the end: you just need the right mindset, the motivation to work hard, and the right mentors around you.” 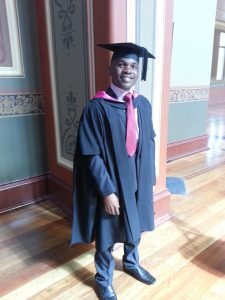 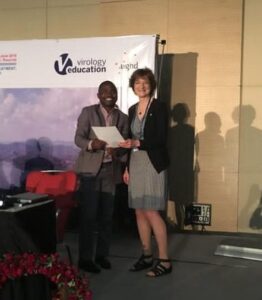